If you take a look at any public sho exhibitions that take place throughout Japan, you will find Joryū at the center of them. Joryū is credited with further developing the world of sho in a new way of expression. His majestic style, which was cultivated with a background in classical calligraphy, became so influential that these large single-character style pieces became synonymous with the name “Joryū”.

The main meaning of this poem is that no matter what kind of life we lead, we are all buried in a grave when we die. In 1967, Joryū commented, “There are so many things I want to try. Too many things. The expression of the brush must be that of the person behind it.” The many different layers of the sentiments of this man, who was a calligrapher, as well as a researcher and a poet, can be felt through the brush strokes of this Chinese poem.

The meaning of this piece is, “to be quiet”. The thick brush strokes of black ink show strength. Joryū also wrote the grass radical a bit larger than usual, making for a uniquely balanced space.

Featured in Nitten Exhibition in 1964

Born as MATSUI Ikujirō in Akita

MATSUI was greatly inspired by YOSHIDA Hōchiku’s calligraphic works of poems. He is known for a calligraphy style that is able to express the essence of those poems.

His style of writing was established as a distinct style of Japanese calligraphy After World War II. Kinseki refers to the style of Chinese characters that were carved into bronze vessels of BCE China. The title, “the voice of kinseki” refers to “hearing” the kinseki, and being able to communicate with the ancients through this piece.
His choice of wording for this title emphasizes his admiration for the classical style, and his characters embody a feeling of antiquity.
Shodō is an attempt to express one’s unique sense through the use of classical characters.

The meaning of “nisshin” is the idea of renewal and reinvention with each new day.

The two large characters are expressed in a loose style, covering the entire two-panel byōbu. Written in korei script (an older version of the reisho script that doesn’t use migibarai, the rightward down stroke), the wide cursive strokes of these characters express a magnanimous and simple yet classic feel, characteristic of Joryū’s personality.

The meaning of this piece is, “The ideal way of life is like water.”

This piece refers to reforming oneself and striving towards improvement. The strokes on the left side of the right character, 修 shū, are expressed in two uneven lines, which adds interest to this piece. Because it is done on a two-panel byōbu, the characters must be balanced well to create cohesion. When commenting on it, Joryū said that wanted viewers of the sho to appreciate that aspect of the piece.

This poem describes a garden with fallen leaves during the autumn season.

Joryū was a calligrapher, but he was also a poet who presided over the compilation of the poetry collection, “Haōju”. His free writing poetic style is similar to that of song.

The meaning here, as the title suggests, is “transparent”. At 79, Joryū experienced a stroke, resulting in paralysis on the right side of his body. He threw himself into rehabilitation, and a year later unveiled this piece at the Mainichi Shodōten. This was the first sho piece he completed after recovering from the stroke.

This is a stone which details the construction of a mountain road, which took 4 years during the Han dynasty to build, carved into it. The script is old reisho. It has a simple and broad feel to it.

About Takuhon Books and Hi Monuments

In classical calligraphy, there are pieces that were written on paper, fabric, wood, and bamboo, as well as pieces that were carved into stone monuments, wood, and even metal. These works were used as the basis for learning and practicing calligraphy, and they would be copied onto paper using an ink rubbing technique. Those rubbings are called takuhon. Some takuhon would also be bound into books, called jō, that are easier to use for learning.

This is a monument that honors the achievements of Sōzen, who was a famous Chinese military commander of the Later Han dynasty. The wideness of the characters, as well as the long downward right stroke are characteristic of this piece. The characters are well-organized, and it is a mature expressions of the clerical reisho script.

⑪Ronkeisho-shi (511 C.E)
This is a rubbing depicting a poem that Zheng Dao Zhao composed himself, which was carved into stone. The wavy characters harmonize well with the bumpy surface of the stone, providing a unique aesthetic.

This is a jō book that was compiled of the ink rubbings of 29 letters written by famous Chinese calligrapher, Wang Xizhi, which were carved into various stone and wood pieces. It is often used as a reference for studying the classical calligraphic script.

The experience is closed for the time being.

We are now offering a shodō experience service for our visitors! Just as the name suggests, this is a 10-minute experience, where you can try your hand at shodō for 500 yen.
You can also customize the experience to create your own unique piece, utilizing the various shodō utensils we have on hand. There are scrolls, frames, and various options to choose from!

We also have spots where you can take photos with your completed pieces as well.

By writing your own calligraphy, you can better understand the pieces displayed in the museum.

You can take part in 10-minute SHODŌ by itself as well, without entering the museum. We hope you’ll give it a try!

※Registration is open until 3:30pm. 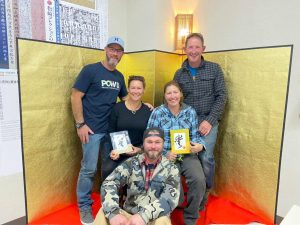